The Road from Tlacolula to San Cristobal de las Casas

I wanted to stay in Tlacolula and continue to help out at the children’s home but I have to keep making my way south to get to the boat on time to sail to Columbia. Believe it or not I was hoping to do another cement pour before I left.

Leaving Tlacolula is easy as there’s only one road. I followed 190 south into the mountains for about 3 hours. Gorgeous vistas around each curve. On Mexico 190 between Tlacolula and Tehuantepec. When I left the children’s home one of the staff, Jill, made me PB&J’s and packed a brown bag lunch for me. I stopped at this store and remembered that I had a bag of food. I felt bad for getting the owners hopes up so I bought a bottle of water.

The road leaves the mountains behind and suddenly there are palm trees, hot weather, and sand on the side of the road. If only it stayed that nice. When the highway makes it’s way toward Chiapas the scenery was nice but suddenly the wind picked up and for 50 miles I was hit with the strongest crosswinds. All I could see in front of me were giant wind turbines. The crosswind was steady and powerful. Enough that trucks were more than swerving into other lanes. I just needed to reach the end and all would be better. That’s at least what I hoped would happen. Riding in wind like that on my G650 X Challenge is no walk in the park. Finally I reached the end of the wind tunnel.

I celebrated the end of the crosswinds with a coke and sat on a stump outside the store for just enough time for a quick rest. I continued on 190 into the mountains where I crossed into Chiapas, my last state in Mexico. The ride was beautiful and great roads to go with it. I would find out later that I passed a really unique natural park. If I had known I would have made the trek to it. It’s called Arco del Tiempo del Río La Venta and it’s the world’s largest natural stone arch at 180 meters high. For future travelers it’s near Cintalapa. 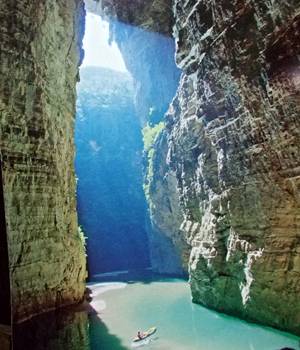 The Arc of Time. Photo from http://arcodeltiempochiapas.blogspot.com/

By the late afternoon I reached the busy city of Tuxtla Gutierrez and looked for the toll road to San Cristobal. It was getting later and I was ok with taking the toll road to save an hour or more. As I approached the toll booth I saw a few people standing just passed the first booth. I thought it was odd that they’d let people stand there to sell things. As I pulled up I noticed the first booth was empty and then I realized the people standing there weren’t selling things. The two men closest to me had bandanas on their faces and they pointed to a sign in front of me. There was a group of teenagers and kids operating the toll gate and graffiti covered the area. The man said the toll was twenty pesos which was 5 or 10 pesos cheaper than the official toll. I reached in my pocket and pulled out the coins I had in that pocket. Only 16 pesos. The bandito/toll collector said that was fine and the kids lifted the toll gate for me. I wish I had my GoPro running for that experience. I don’t know if it’s still going on but apparently it has something to do with the teachers strike. They didn’t look like teachers though.

The toll road went high into the mountains and I found myself surrounded by thick fog. The traffic slowed and I saw a makeshift shelter on the side of the road where a family was selling fresh grilled elote. Just as I got off my bike it started raining and the family welcomed me inside. They took an old bucket and offered it to me as a place to sit down. We talked for a minute about as much as I could with my Spanish. Jaun and his wife and daughter live in the hills nearby and come down here to sell elote to travelers. This was the best elote I’ve had yet. The corn was grilled just slightly crispy and there was the perfect blend of chili, crema, and lime. Before I left I asked if I could get a photo of his nice family and he replied asking for 50 pesos. I wonder how many people pay that. I would probably do the same thing if I were him. You get one traveler to pay and you’ve made the same as selling 10 elote, which on this road, business seemed slow. I politely thanked them and got back on the road.

A few minutes later I was in San Cristobal de las Casas. I’m spending a few days here so there’ll be a lot of photos and stories to come.